USD to CAD Update: Canadian dollar’s wild ride ends the week on a slight down note

By Interchange FinancialSeptember 24, 2021No Comments 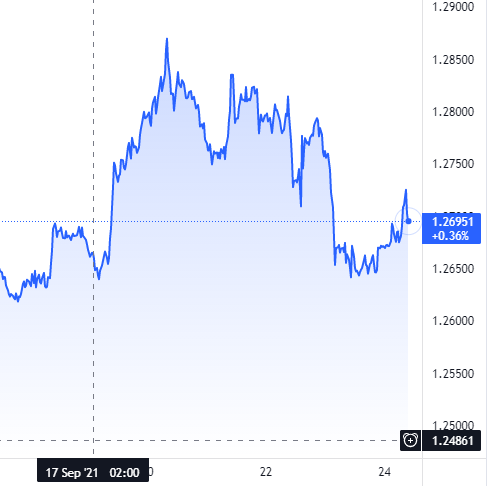 It has been a busy week of news for the Canadian dollar and it showed in the volatility of the exchange rate.  An unusually volatile loonie has gyrated in a wide range of two and a half pennies against the US dollar in the last five trading days.  The week started with market sentiment decidedly negative with fears that a debt crisis plaguing Evergrande, one of China’s largest property developers, would lead to a global contagion.  That led to a sell-off in stocks and all types of risk assets.  The Canadian dollar slumped and touched its lowest levels since late 2020.  The federal election came and went without much impact on the exchange rate as the consensus view that the Liberal minority would hold turned out to be right.  But the volatility in exchange rates continued as the markets prepared to hear from the US Federal Reserve and feared that the US central bank would finally detail the pace and timing of its asset purchases.   As it turned out, the Fed did not detail its plans for tapering but moved forward its expectation for a first interest rate hike to late 2022 from early 2023, as had been largely anticipated.  That led to a resurgence in risk appetites as stocks traded up strongly and the Canadian dollar largely recovered its losses from earlier in the week.  This morning, the Canadian dollar is trading down by about 0.3% and near the middle of the week’s range.  USD to CAD at 1.270 (CAD to USD is at 0.787).  Also this morning, crypto currencies are down substantially as China has expanded its crackdown from mining to any transaction involving non-state digital currencies.