By Interchange FinancialSeptember 15, 2021No Comments 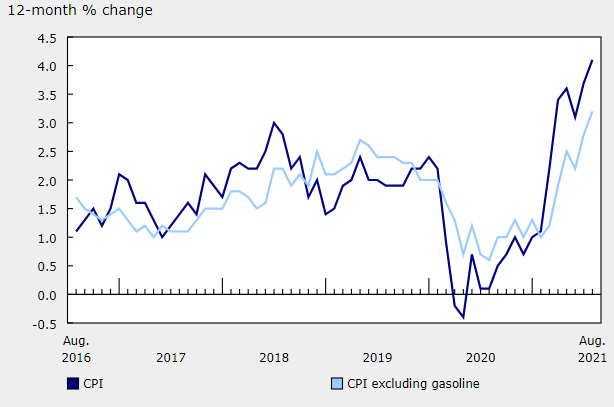 Canada’s Consumer Price Index (CPI) rose 4.1% on a year-over-year basis in August, the fastest pace since March 2003, and up from a 3.7% gain in July.  The high rate of price increases is likely to get a lot of attention in the politically charged environment of the Federal election.  But the number is only slightly above forecast and unlikely to sway markets or policy makers at the Bank of Canada, who continue to hold that these price increases are transitory.  The fact that the US figure, which was released, yesterday indicated a cooling of inflation in that country also suggests that it is only a matter of time before price increases will slow in Canada as well.  The US release led to a drop in the value of the US dollar against CAD yesterday but the greenback quickly bounced back as market sentiment turned negative and risk currencies like the Canadian dollar slumped.  In fact, markets have been in a funk so far this month with stocks declining nearly every day in September.  There is general anxiety about the next shoe to drop on the pandemic and and the next move by central banks.  That overall negative sentiment is pressuring the Canadian dollar which is down slightly so far this month despite rising oil prices.  The Federal election is coming to an end and the most likely result remains that the Liberals will retain a minority government.  Of course, the race is tight and there is a real possibility of a Conservative minority government, or even a Liberal majority.  Either of those results would surprise the markets and likely to impact the exchange rate in the short term.  USD to CAD is currently at 1.267 (CAD to USD is at 0.789).