USD to CAD Update: Will the election impact the Canadian dollar?

By Interchange FinancialSeptember 17, 2021No Comments 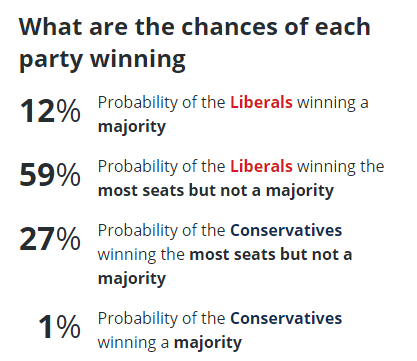 The Canadian dollar is very slightly up this morning with USD to CAD currently at 1.266 (CAD to USD is at 0.790).  Canadians head to the poll on Monday to vote in a Federal election.  Will the result of the election impact the Canadian dollar exchange rate?  Election models all show that the most likely outcome is that the Liberals win a plurality of seats which would mean that they form a minority government.  For example, the CBC puts those adds at 59% (shown above) while 338Canada estimates that there is a 51% possibility that the Liberals will form a minority government.  That is the outcome that the market expects and it would be a continuation of what we had before the election was called.  As such, that result would not impact the exchange rate.  The second most likely outcome ( around 30%) is that the Conservatives win the most seats and form a minority government.  In that scenario, we would expect a brief and modest bump in the Canadian dollar.  This is because the Conservatives would be seen as somewhat more likely to reduce the deficit and to open up opportunities for Canadian energy exports.  Finally, there is a small possibility (around 15% depending on the model) that we get a Liberal majority government.  That would be a significant surprise to the market but we would again expect only a modest and likely temporary decline in the Canadian dollar as the market anticipates further restrictions on the Canadian oil industry as well as more government spending and larger deficits.  So, our overall take is that the market views the election as “much ado about nothing”, and that the most likely result is little to no impact on the exchange rate.  Also, at the moment, the currency exchange market is much more sensitive to things like oil prices and global economic sentiment which remains cautious due to a persistent virus, a Federal Reserve meeting next week and a historical tendency for September to be a weak month for equities.  As such, any temporary impact from the election could easily be washed out as a result of other developments on Tuesday morning.