By Interchange FinancialOctober 20, 2021No Comments 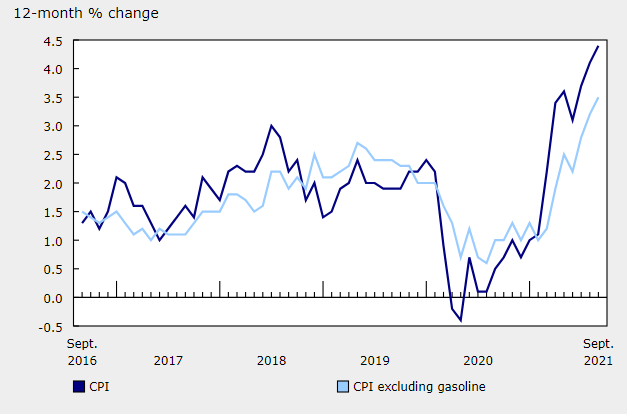 According to figures released by Statistics Canada this morning, the consumer price index rose 4.4 per cent in September from a year earlier.  That level of inflation is the highest since February of 2003 but within consensus expectations.  As such, the news did not move the Canadian dollar exchange rate, with USD to CAD currently at 1.235 (CAD to USD is at 0.809).  High rates of inflation have been reported in Canada and the US for the last several months (see figure above).  Central bankers, including Tiff Macklem at the Bank of Canada, maintain that the price increases are transitory.  To date, their explanation has largely revolved around prices catching up to where they would have been if not for the low inflation rates in the early part of the pandemic (the “base effect”).  More recently, the rationale has been adjusted to allocate some of the blame for inflationary pressures on supply chain problems plaguing the global economy.  The dismissal of inflation as transitory has faced some backlash from consumers as well as business leaders and commercial bankers.  One observer in our office put it this way: “has Tiff been to the Food Basics recently?”  Regardless, we are certain to hear more from the Bank of Canada on this issue and its plans for monetary policy next week at its regularly scheduled policy decision.  Oil (WTI) is down over 1% and has dipped to below 82 USD as various attempts at intervention to address the supply/demand imbalance are being reported out of Europe.